Thanks for joining me for Truth in the Tinsel! {If you’re wondering what I’m talking about, I hope you’ll read this post and join us for this delightful Advent experience that focuses on the true reason for the season–it’s not too late to start!}

**SEE ALL OUR TRUTH IN THE TINSEL POSTS HERE!**

Truth in the Tinsel actually began on December 1st but as I mentioned in a previous post, I’ll be highlighting specific days here at the blog. We are using one of the alternate craft schedules that includes all the characters in the Christmas story {think Mary, the angel, the shepherds, etc}. I decided to take a more low-key approach in the hands-on portion, since I’m not a very crafty mom and the month of December tends to fill up quickly!

We will be using the Advent chain and reading the Bible passage for each day though. I’ll have pics up of our Advent chain tomorrow {hopefully!} because it’s not done yet. Even though it was supposed to be done December 1st. Ahem.

So since we’re on day three, today we did the Zechariah {or as my Bible version says, Zacharias} craft! L, my four year old, had lots of fun with this one and it was really very quick.

This craft used yarn, googly eyes, a shell shaped macaroni and a yogurt container lid. We were supposed to pop a bubble wrap bubble for his mouth, but we just drew a circle to show that Zechariah was wowed when the angel told him his wife would have a baby! 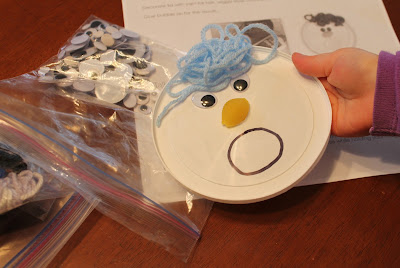 L also called out “I believe what God says!” while hopping on one foot, twirling in a circle and holding her tongue between two fingers :) This wasn’t my idea, it is one of the talking points given for each day’s story; a little extra something your kids can do if you have time! 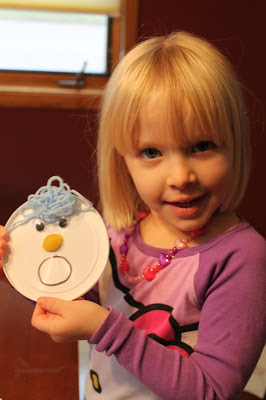 Did you start Truth in the Tinsel yet? Have your kids enjoyed it so far? Join us tomorrow for day four’s craft, where we use our creative juices to make a certain angel!

Buy your copy of Truth in the Tinsel today! Remember that you can use code PURPOSEFULMOM for 20% off! 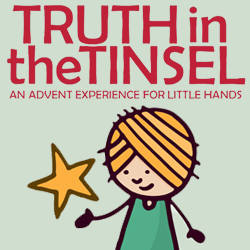 Shared at Time Warp Wife, Your Thriving Family and MercyINK