I know I haven’t posted much of anything as far as pregnancy updates on the blog, except for my announcement at the beginning and tidbits here and there but I wanted to share where I’m at and what’s going on with baby number four!
I mentioned on Facebook that we’re having a baby girl, so my 5 year old daughter is super pumped to have a sister! I have two brothers and no sisters so I’m excited for her too!
She’s scheduled to make her arrival around October 2, although I always go days late (9 to 10) so I’m setting myself up to wait a bit longer than anticipated. My 7 year old tells me that if she’s born in September I will have a beautiful mother’s ring: red (garnet for January and ruby for July), white (diamond for April) and blue (sapphire for September)! Very patriotic, he says :) 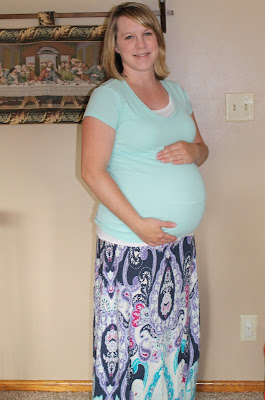 Right now that puts me at almost 34 weeks pregnant with a baby that’s the size of a pineapple (if you’re thinking of size in terms of fruits and veggies) although she feels much bigger than that with the way she’s already up in my ribs, kicking me as she rolls around in awkward positions. I’m also feeling nauseous again–yuck. I thought that had ended (finally) at 20 weeks, but here we are again. But that’s okay, because as I remind myself every time, it’s worth it in the end!
There is much joy to be found in looking forward to a new little one, but some nervousness as well. Thinking of handling four children is overwhelming to me, although we’ve made the transition from 2 to 3, it’s still a bit crazy to think about! Is there anything different about adding a fourth verses adding a third? If there are any mommas out there with advice, I’d love to hear it ;)As is obvious, my blogging will be slowing down a bit once October comes. In September, I’m planning to do a whole month of posts on the topic of blogging, which I hope will be helpful to those who are bloggers and those who are not!

So that’s what’s going on with my life right now! Are any of you looking forward to a new addition soon? If so, I pray that it’s going well for you and that you are not too hot in these last few weeks of summer!

4 Comments on My {Late is Better than Never} Pregnancy Update on Baby #4!