This past week we attended a Bible camp as a family where my husband served as dean of the camp. It was for pre-teens, which is an age I love. They are enthusiastic, friendly and respectful. We were able to listen to encouraging messages from the main speaker and area pastors. We even got to all sit together as a family which is rare because my husband is usually the one up front preaching on Sunday mornings and other services. :)
One of the pastors shared the story of Joseph, the powerful Old Testament man who was in service to Pharaoh and forgave the brothers who had left him for dead. In the middle of the service, I took Will to the bathroom. Right there in the stall he asked, “When the angel came to Joseph and told him his mom was going to have a baby, was that true?”
It took me awhile to figure out that Will was referring to Jesus’ earthly father, Joseph, who Will thought was the same person as the Joseph of the OT. And apparently Mary was the “mother” he was referring to!
I told him that yes, it was true that the angel told a different Joseph that his wife would have a baby and that the baby was Jesus. “Oh,” he said, “I thought so.” As if he was right all along. :)
The kids hiding in a large tote…they like to set the cover on their heads, jump up and yell, “Surprise!” 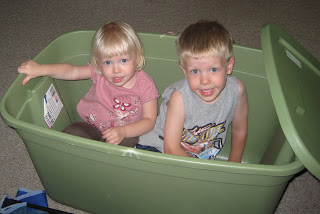