Will came running up to me yesterday saying, “Mom, can I say the word ‘ridiculous’? Or is that just a word for grown-ups?” I told him that it was fine to say about something but that you shouldn’t call somebody that. Later I heard him mumbling something about a ridiculous doorknob…
Speaking of words, Leah has been saying quite a bit lately. I thought perhaps she was going to be the quiet one of the family but it seems she is going the way of her brother :) Some of her favorite phrases:
“Huckle-Owly” for Huckle Cat and Lowly Worm on the Busytown videos we watch
“Help Peas” whenever she needs something
“Dink Peas” when asking for a drink (we’re still working on enunciation)
“Daddy Go Work” which is said every morning around 8:30
“Konkey” for donkey (her favorite animal at the moment) 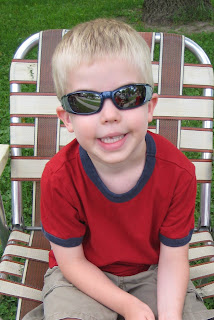 Isn’t it fun to watch your children grow and learn?