Did you ever watch The Donut Man videos or see a show? My kids have a DVD of one of the live shows of The Donut Man and the Donut Repair Club. We were watching it the other day and Will commented the following:
“Mom, I bet most of those people who were at the Donut Man show have died because there were lots of moms and dads and grandmas there and…well, that show was a LONG time ago.” (yes, with the added emphasis on “long”).
I checked the video. It was filmed in 1993. 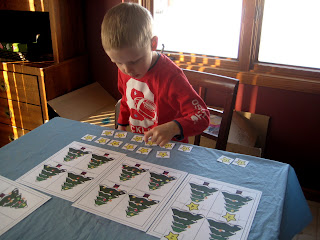 In other news, we’ve been busy doing lots of indoor crafts and activities because it’s been 10 degrees or colder here lately (it was -15 Farenheit on Sunday). We found a really fun Christmas Preschool Activity Pack at Confessions of a Homeschooler. Will is pictured doing one of the activities. Can’t beat something that’s free and creative to boot! I don’t feel like I inherited the creativity gene from my mother so I like to get ideas from others :)